Just outside Honokohau Harbor, where most of our trips depart, are a group of dive sites that have become “crew favorites”.

The Honokohau Sites - “Manta Ray Bay” aka “Honokohau”, “Turtle Heaven”, and “Turtle Pinnacle” are arguably the best area in the entire state of Hawaii to encounter Tiger Sharks. See our YouTube video about this area here.

Here in Kona, you can see Tiger Sharks year-round.  You don’t even have to go deep.  It can take a few dives at the sites near Honokohau, (or you might get lucky and see one on your first dive.)  It helps to have “global awareness” - in other words - “keep your head on a swivel”.  They are shy and don’t like to be seen. But occasionally, they are curious enough to allow us to get a good picture. 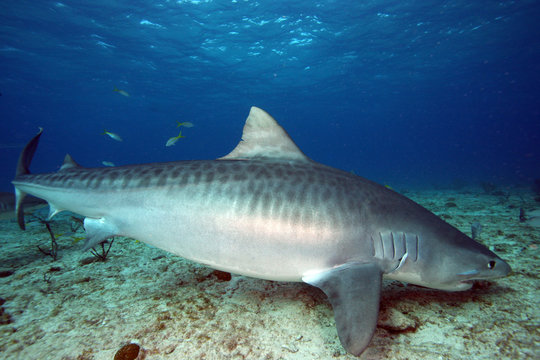 Tiger Sharks are usually ranked just behind Bull Sharks and Great Whites on lists of attacks on humans.  Here in Hawaii, there is an occasional bite (around 6 per year, state-wide - usually non-fatal).  These rare instances are believed to be a case of “mistaken identity” on the part of the Tiger Shark.  But in the overwhelming percentage of these bites, the victim, usually a swimmer, surfer, or paddle boarder, never saw the shark prior to the bite. While these spectacular animals are not dangerous to scuba divers, it’s hard to describe the excitement of being in their presence. Even divers who were hoping NOT to see a shark during their dive, are usually grateful for the experience.

World-wide, for every 100 million sharks killed by humans per year, about six to eight humans are killed by sharks every year.

Although tiger sharks are not considered endangered, they are vulnerable to overfishing. This is because both humans and tiger sharks have a love for the same kinds of foods: squid, mahi-mahi, shrimp, tuna, and other fish. So sometimes accidentally, they are caught in fishing nets or on Long Line fishing hooks.

Sometimes humans kill tiger sharks intentionally. Their skin can be used for leather products such as wallets or shoes. And their fins are valuable in the market for shark fin soup.

Therefore, many people hunt them, but it is illegal to do so in Hawaii. We are the first state in the USA that has banned shark fishing. This is due in part because sharks are a common “aumakua” or ancestral god in local Hawaiian culture.

The Tiger shark is a large, powerful predator of tropical and warm temperate waters.

Well known for their tiger-like stripes on its body. However, as they get older these stripes fade.

Young Tiger sharks are mostly nocturnal, but as adults they hunt primarily during the day. They may range over great distances and can tolerate a wide variety of water temperatures. The largest Tiger sharks ever recorded were 15 feet long and weighed 1,700+ pounds. They live for about 15 years, (the oldest on record at 50 years old).

Tiger sharks help maintain ocean ecosystem health by keeping populations in check. By eating mid-level predators, tiger sharks ensure a balance within their environment that allows for marine life and coral reefs alike to flourish! They also can be scavengers, helping to keep our oceans and beaches clean.

While there are over 20 named individuals in the area, Laverne the Tiger Shark has been a fixture in the waters near Honokohau Harbor for many years, to the delight of divers and snorkelers alike. The shark, who is estimated at about 14 feet long, is rumored to be 20 years old and has garnered quite a following.

Many JDL divers over the years have had the honor of seeing Laverne under the surface and in our harbor. As a result, they have captured some wondrous images of this local celebrity.

We hope on your next dive with Jack’s Diving Locker, you will get a chance encounter with our local celebrity Laverne.

The Lionfish Is Invasive & Dangerous, So Why Not Kill Them In Hawaii?

Hawaiian Beaked Whales: Rare To The Point Of Elusive